The P-90 (sometimes written P90) is a single coilelectric guitarpickup produced by Gibson since 1946. Gibson is still producing P-90s, and there are outside companies that manufacture replacement versions. Compared to other single coil designs, such as the ubiquitous Fender single coil, the bobbin for a P-90 is wider but shorter. The Fender style single coil is wound in a taller bobbin but the wires are closer to the individual poles. This makes the P-90 produce a different type of tone, somewhat warmer with less edge and brightness. As with other single-coil pickups, the P-90 is subject to mains hum unless some form of hum cancelling is used.

Around 1940 Gibson offered a new bridge pickup for ES-100/125 series, as an alternative to the classic Charlie Christian pickup, cased in metal.

Officially, P-90 pickups were introduced in 1946, when Gibson resumed guitar production after World War 2. They were initially used to replace Gibson's original 'bar' or 'blade' pickup, also known as the Charlie Christian pickup, on models such as the ES-150, and by the end of the 1940s it was the standard pickup on all models.

The P-90's reign as the Gibson standard pickup was short-lived, as a new design of pickup, the humbucker, was introduced in 1957. Equipped with double coils, the new pickup boasted greater output and less hum, although with less high end response. This new pickup, occasionally named PAF, very quickly took over as the preferred choice for all Gibson models, relegating the P-90 to budget models such as the ES-330, the Les Paul Junior and Special, and the SG Junior and Special, such as those used by Pete Townshend and Carlos Santana. This trend continued throughout the 1960s and particularly in the early 1970s, where the P-90 all but disappeared from the entire Gibson range. By the 1970s, smaller single-coil pickups, mini-humbucking pickups, and uncovered humbucking pickups began replacing the P-90 pickups on Gibson's budget and lower-end models.

In 1968, Gibson reissued the original, single-cutaway Les Paul, one version being a Goldtop with P-90 pickups. In 1972, they produced Limited Edition reissues, called the '58 Reissue' though actually based on the 54 Goldtop Les Paul, with a stopbar tailpiece; and the 54 Custom, the 'Black Beauty,' equipped with a P-90 in the bridge and an Alnico 5 pickup at the neck. Total production of these guitars was quite small. In 1974, Gibson put the P-90 pickup in their Les Paul '55, a reissue of the Les Paul Special from that era. It was followed in 1976 by the Les Paul Special double-cutaway (DC) model and in 1978 by the Les Paul Pro (which had an ebony fingerboard with trapezoid inlays). Since the 1970s, the P-90 pickup has seen some success in various models in the Gibson line, mostly through reissues and custom versions of existing models. Currently it is featured most prominently on the Les Paul Faded Doublecut, and certain models in the Historic range.

For the 2014 model year, the Les Paul Melody Maker featured a variant of the P-90 pickup called the P-90S, inspired by the original pickup of the Gibson ES-125. This variant possesses six rectangular Alnico-slug pole pieces with no individual height adjustment.

There are three major varieties of P-90 casing:

Being a single-coil design, the tone of a P-90 is somewhat brighter and more transparent than a humbucker, though not quite as crisp and snappy as Fender's single-coil pickups. The tone therefore shares some of the single coil twang, but having large amounts of midrange and often described as thick. The reason behind the tonal difference between P-90s and Fender single-coil pickups is due to construction methods. P-90s use bar magnets set under the polepieces, much like a humbucker, whereas Fender single-coils use rod magnets as the polepieces.[citation needed] Popular guitars that use or have the option of using P-90s are the Gibson SG, Gibson Les Paul, Ernie Ball Axis series and the Epiphone Casino. Fender Jazzmaster pickups are often confused with the P-90; however, their only similarity is cosmetic, since there are many significant visual, dimensional and electrical differences.

All Gibson P-90 pickups (vintage and otherwise) were machine wound on Leesona coil winding machines, although their electrical specifications may vary slightly due to operator error. In common with many other modern pickup types, there are two versions of modern P-90: neck and bridge version. Their DCresistance tends to be around 7–8 kΩ for neck pickups and 8–9 kΩ for bridge pickups. Early P-90 pickups made before approx 1974 were manufactured with no difference in the bridge and neck position and were interchangeable. After winding, pickups were hung on a rack holding 20 pickups and assembled according to the model of guitar they were to be used on (Soap-Bar or Dog Ear). Earlier pickups (around 1952) had Alnico 3 magnets, but in 1957 Gibson switched to Alnico 5.

P-90 Soapbar-3, made by Seymour Duncan

One negative aspect of the P-90 pickup is its susceptibility to 50 Hz / 60 Hz mains hum induced in its coil by external electromagnetic fields originating in mains-powered electrical appliances, motors, lighting ballasts and transformers, etc. This susceptibility is common to all single-coil pickup designs, but the P-90, having around 2,000 more turns of wire in its coil than Fender pickups, receives a relatively large amount of mains hum. Several manufacturers now make hum-canceling pickups that resemble the P-90 but most do not have a similar sound.

There are three types of hum canceling pickups that look like a P-90:

First generation Stacks have a second identical coil below the main one. Hum is effectively cancelled by connecting both coils out of phase. However, as with all common stacks there is a large degree of magnetic coupling between the coils, cancelling string signal along with the hum. Manufacturers over-wind the coils to recover the output loss—but this introduces a second problem: excessive coil capacitance that robs the sound of dynamics, presence, and touch sensitivity. These two design issues gave these types of pickups a bad reputation among musicians.

The Sidewinder is an attempt to overcome the drawbacks of the stacked design. It does this by reorienting the coils so that while electrically cancelling they are on opposite poles of a magnet. Thus, unlike stacked coils, output is hotter since the net effect is to add rather than subtract the signal between the coils; thus, the impedance can be lower, avoiding overwinding to obtain sufficient output. There is less signal cancellation. Sonically these sit somewhere between a true P-90 and a stacked pickup. They don't chime but they aren't nasal or lifeless either. They are ideal candidates for overdriven sounds where loss of sparkle is less important than avoiding hum amplification. These type of pickups have the same appearance of P-90s.

The new generation Zero-Hum P-90 Hx by Kinman strives to have a P-90 sound and appearance, but is far more complex, with 202 individual parts. Sonically destructive magnetic coupling between the coils is negated by highly efficient magnetic shields around the upper coil. The lower coil is wound with much thicker wire and far fewer turns onto a unique laminated steel bobbin for high efficiency. Thus, the hum voltage is the same as the upper coil and cancels hum. Kinman advertise their P-90 Hx as having a sonically transparent 600-Ohm hum sensor, which is remarkable considering the large amount of hum characteristic of P-90s.

There is a fourth type of pickup under a P-90 cover, referred to as a large mini-humbucker. These, however, are not intended to mimic the sound of a P-90. Like all side-by-side humbuckers, they have lower hum levels. This configuration operates in the same way as a humbucker: both coils individually respond to string vibrations, but since the two coils have a reversed magnetic polarity, the signal from both coils is added, while the hum is effectively canceled. Consequently, these types of pickups sound more like a humbucker than a P-90.

Around 1970, Gibson replaced the P-90 on several models with a mini side-by-side humbucker now known as the mini-humbucker. This pickup was originally used on Epiphone models such as the Sheraton and with suitable mounting hardware became interchangeable with the P-90. In response to a resurgence of popularity of the P-90 Gibson issued the P-100, a stacked version (see above) of the P-90. Gibson also makes a new noiseless P-90 version called the H-90, which is found in Billie Joe Armstrong's Signature Les Paul Junior. The H-90 has two stacked coils and Gibson claims that it does not lose the characteristics of a P-90 although many players feel differently, perhaps contributing to its lack of use in other guitars.

How do our licenses work? 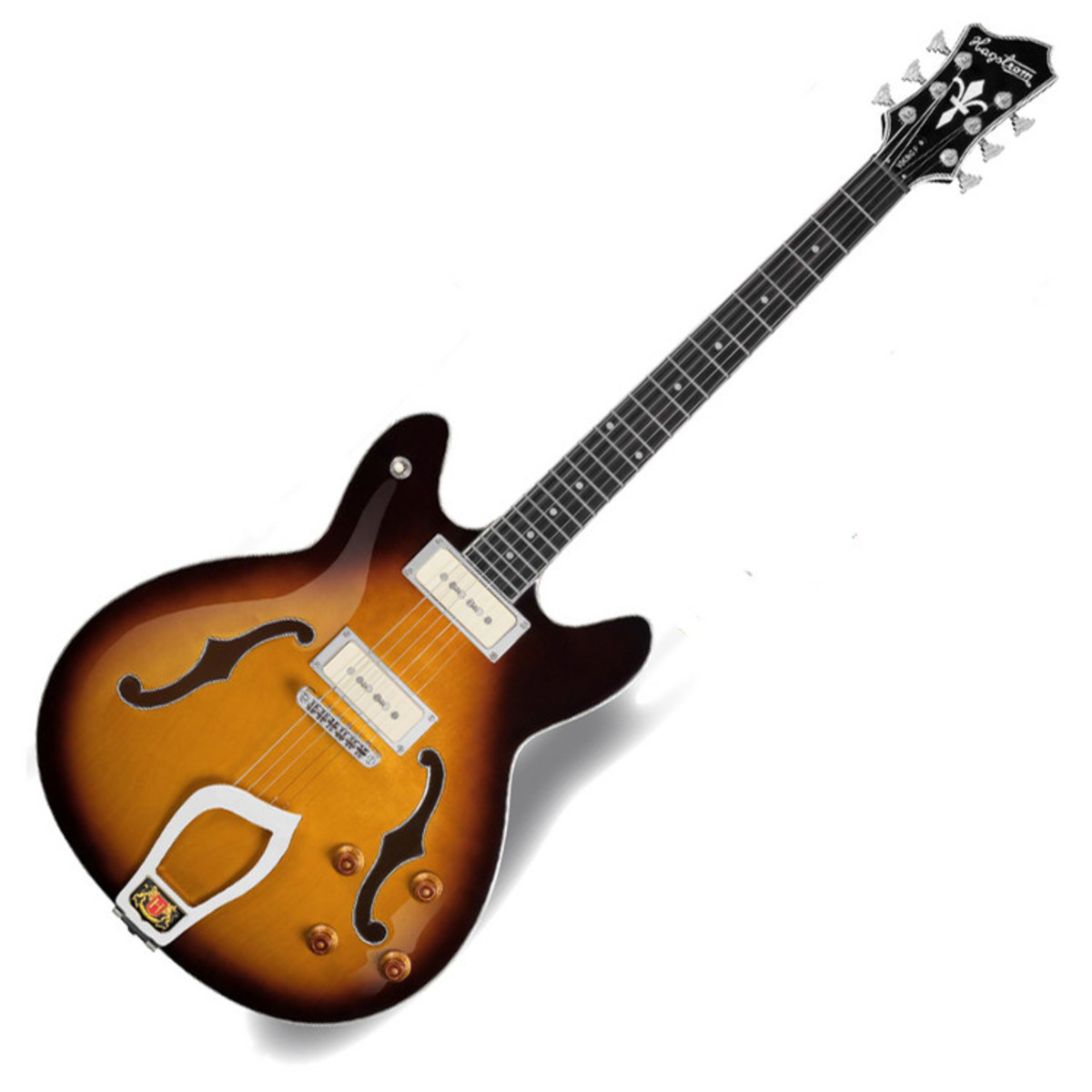 This new version offers a new interface, optimized performances, as well as many new features. Our goal is to exceed our users'expectations by releasing a more evolved product that remains simple to use and continues to push Guitar Pro forward in exciting new ways. Discover the brand new Guitar Pro 7.5 features here.

The software is available in English, French, German, Italian, Japanese, Korean, Portuguese, Russian, Spanish, Swedish, Traditional and Simplified Chinese. Translations in other languages will be provided in the next free software updates.

Discover the Guitar Pro app
for smartphones and tablets