Nitrogen is present in almost all proteins and plays important roles in both biochemical applications and industrial applications. Nitrogen forms strong bonds because of its ability to form a triple bond with its self, and other elements. Thus, there is a lot of energy in the compounds of nitrogen. Before 100 years ago, little was known about nitrogen. Now, nitrogen is commonly used to preserve food, and as a fertilizer.

Nitrogen is a non-metal element that occurs most abundantly in the atmosphere, nitrogen gas (N2) comprises 78.1% of the volume of the Earth’s air. It only appears in 0.002% of the earth's crust by mass. Compounds of nitrogen are found in foods, explosives, poisons, and fertilizers. Nitrogen makes up DNA in the form of nitrogenous bases as well as in neurotransmitters. It is one of the largest industrial gases, and is produced commercially as a gas and a liquid.

Nitrogen, which makes up about 78% of our atmosphere, is a colorless, odorless, tasteless and chemically unreactive gas at room temperature. It is named from the Greek nitron + genes for soda forming. For many years during the 1500's and 1600's scientists hinted that there was another gas in the atmosphere besides carbon dioxide and oxygen. It was not until the 1700's that scientists could prove there was in fact another gas that took up mass in the atmosphere of the Earth.

Discovered in 1772 by Daniel Rutherford (and independently by others such as Priestly and Cavendish) who was able to remove oxygen and carbon dioxide from a contained tube full of air. He showed that there was residual gas that did not support combustion like oxygen or carbon dioxide. While his experiment was the one that proved that nitrogen existed, other experiments were also going in London where they called the substance 'burnt' or 'dephlogisticated air'.

Nitrogen is the fourth most abundant element in humans and it is more abundant in the known universe than carbon or silicon. Most commercially produced nitrogen gas is recovered from liquefied air. Of that amount, the majority is used to manufacture ammonia ((NH_3)) via the Haber process. Much is also converted to nitric acid ((HNO_3)). 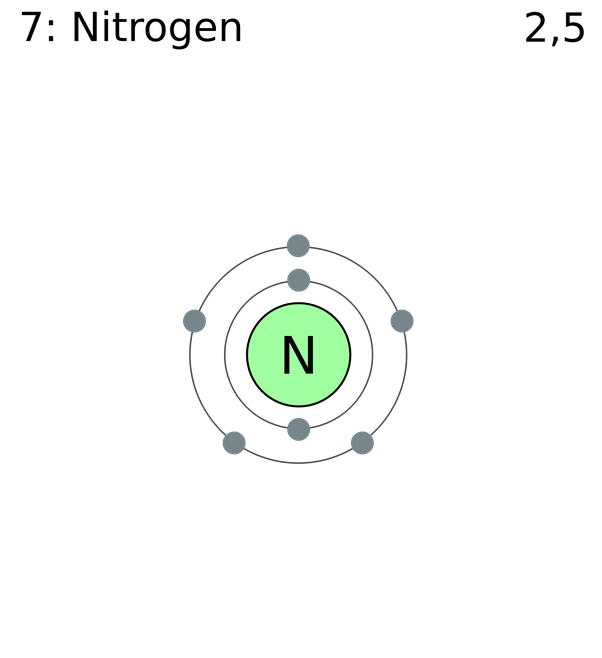 Nitrogen has two naturally occurring isotopes, nitrogen-14 and nitrogen-15, which can be separated with chemical exchanges or thermal diffusion. Nitrogen also has isotopes with 12, 13, 16, 17 masses, but they are radioactive.

The two most common compounds of nitrogen are Potassium Nitrate (KNO3) and Sodium Nitrate (NaNO3). These two compounds are formed by decomposing organic matter that has potassium or sodium present and are often found in fertilizers and byproducts of industrial waste. Most nitrogen compounds have a positive Gibbs free energy (i.e., reactions are not spontaneous).

The dinitrogen molecule ((N_2)) is an 'unusually stable' compound, particularly because nitrogen forms a triple bond with itself. This triple bond is difficult hard to break. For dinitrogen to follow the octet rule, it must have a triple bond. Nitrogen has a total of 5 valence electrons, so doubling that, we would have a total of 10 valence electrons with two nitrogen atoms. The octet requires an atom to have 8 total electrons in order to have a full valence shell, therefore it needs to have a triple bond. The compound is also very inert, since it has a triple bond. Triple bonds are very hard to break, so they keep their full valence shell instead of reacting with other compounds or atoms. Think of it this way, each triple bond is like a rubber band, with three rubber bands, the nitrogen atoms are very attracted to each other.

Nitrides are compounds of nitrogen with a less electronegative atom; in other words it's a compound with atoms that have a less full valence shell. These compounds form with lithium and Group 2 metals. Nitrides usually has an oxidation state of -3.

When mixed with water, nitrogen will form ammonia and, this nitride ion acts as a very strong base.

When nitrogen forms with other compounds it primarily forms covalent bonds. These are normally done with other metals and look like: MN, M3N, and M4N. These compounds are typically hard, inert, and have high melting points because nitrogen's ability to form triple covalent bonds.

Nitrogen goes through fixation by reaction with hydrogen gas over a catalyst. This process is used to produce ammonia. As mentioned earlier, this process allows us to use nitrogen as a fertilizer because it breaks down the strong triple bond held by N2. The famous Haber-Bosch process for synthesis of ammonia looks like this:

Ammonia is a base and is also used in typical acid-base reactions.

Nitrides use a variety of different oxidation numbers from +1 to +5 to for oxide compounds. Almost all the oxides that form are gasses, and exist at 25 degrees Celsius. Oxides of nitrogen are acidic and easily attach protons.

The oxides play a large role in living organisms. They can be useful, yet dangerous.

Hydrides of nitrogen include ammonia (NH3) and hyrdrazine (N2H4).