Responsible for the company's Internet platform and the integrated development of the content and culture ecosystem. PCG integrates social platforms such as QQ and QZone with traffic platforms such as Tencent's App Store and browsers, as well as content platforms including news, videos, sports, live broadcasts, animes and movies to develop a better growth environment for Tencent's content. At the same time, Tencent introduced its mini-programs feature that allows smartphone users to access mobile apps across the globe on WeChat without downloading them. In July 2017, Tencent bought a 9% share in Frontier Developments, 79 the creator of the Elite: Dangerous and Planet Coaster franchises; as well as developer for Rollercoaster.

There was a lot of buzz this week over the launch of WeChat mini program. Everyone from TechCrunch to Forbes keep praising the new Tencent feature. Mashable even describes mini-programs as “beating Google to the punch”.

Let’s see why these assumptions are all deeply, deeply flawed…

So what’s the promise of WeChat mini-programs? 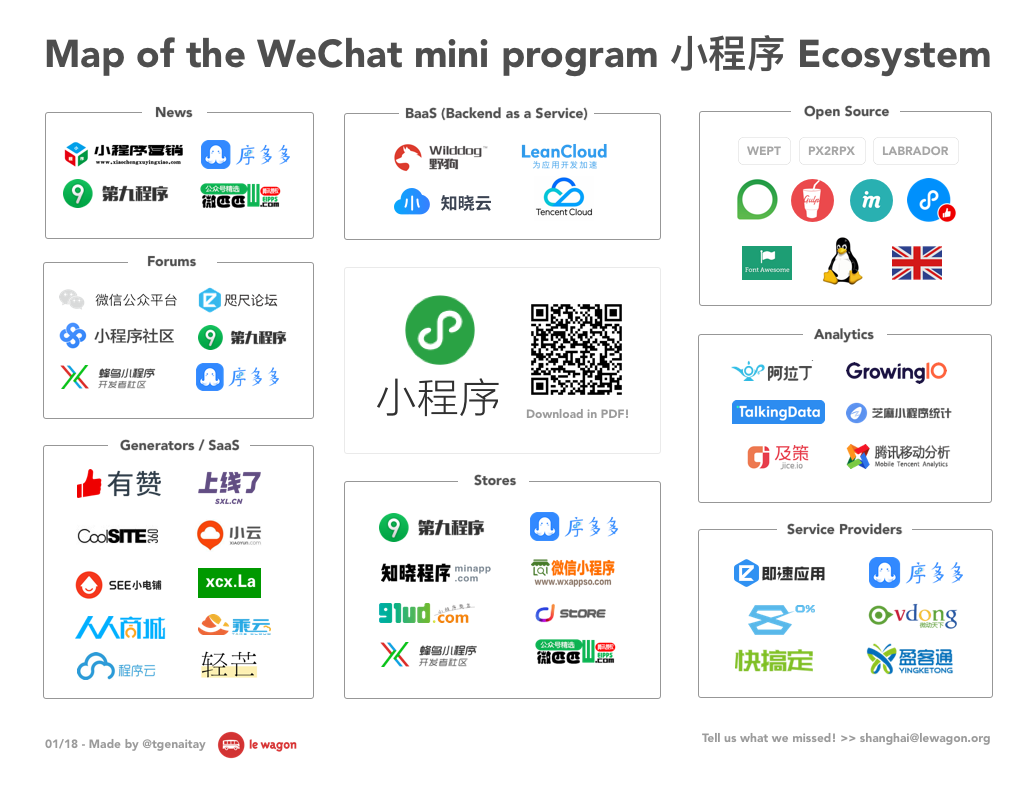 APP’s you don’t need to install

APP’s you don’t need to install exist for a while. Actually they exist since the 80’s. Surprised? Well, you might be familiar with the name of these magic APP’s. They’re called Webpages.

The web comic xkcd made fun of this concept as early as 2014:

At the core this is what mini programs are: they are webpages, created in a language very similar to traditional web-APPs, and WeChat simply gives you a way to cache their code on your phone.

“but Thomas, it’s not about the programming language, it’s about being able to do everything from within WeChat, making it a beautiful integrated ecosystem”

I hear you. But what if I told you there is already an eco-system of APP’s integrated inside WeChat? You know about it already. These are WeChat service accounts.

WeChat min-programs are offering the promise of an eco-system of APP’s which will keep you from ever leaving WeChat. 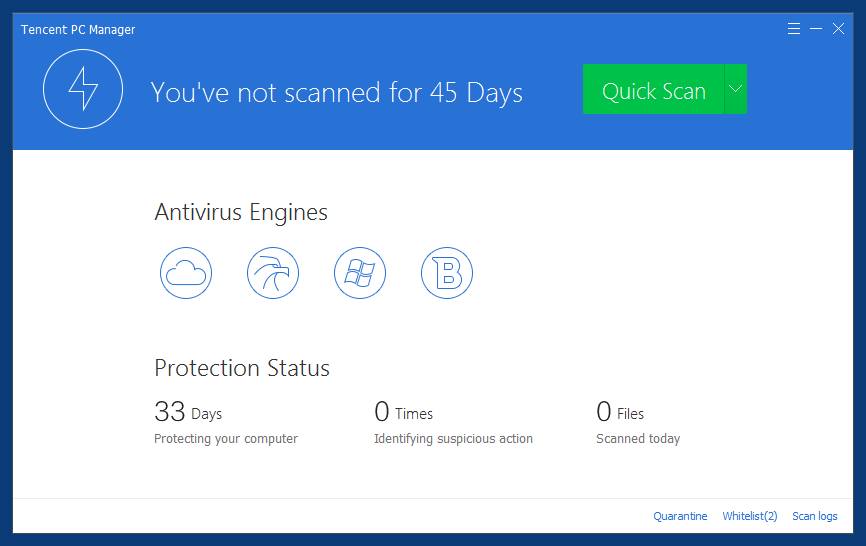 The problem is: that’s already the reality people are living in, in China. Chinese users spend 35% of their daily APP-time on WeChat. And they do much more than chatting: WeChat already enables you to order food, dry cleaning or cabs. This is mostly happening through WeChat Service Accounts linking to HTML5 web-APPs.

The WeChat service account of eDaiXi (e袋洗) enables you to have someone pick up your laundry for dry cleaning, and it existed way before mini-programs were even announced!

WeChat users are already struggling to clearly wrap their mind around the difference between Subscription and Service accounts. Is there a need for another category of accounts? Most likely not.

The problem with WeChat mini-programs

The situation wouldn’t be so dire if WeChat mini-programs were just an improved version of WeChat Service Accounts. But they come with some serious liabilities.

Development: WeChat mini-programs are requiring developers to write in a Tencent proprietary language: HTML has to be replaced with wxml, CSS with wxss. Developers will have to learn yet another framework specially focused on mini-APPs. Some large companies might make a short-term investment to train some developers to use these new frameworks. But setting a new development standard might well keep WeChat mini-programs from going mainstream.

Discoverability:Notion sk. there is no official APP store to find WeChat mini-programs, leaving all the responsibility of discoverability to the publisher. Users have to enter the exact name of the mini program in order to find it. Moreover, you can’t easily set up a QR code linking to the mini-program that can be long-pressed, you would have to scan the QR code from your camera.

Accessibility: only Android users are able to add the APP on their phone home screen. This feature isn’t available for iOS users. All iOS users (which are traditionally taste-makers in China. iOS users led the widespread adoption of WeChat in China) will have to use the WeChat search function to find their old mini-programs. A process which isn’t any better than looking for WeChat service accounts.

Walled gardens: mini-programs have been compared to Google Instant APP’s. But they actually have completely opposite philosophies. Google Instant APP’s are about allowing more inter-connectivity by enabling to easily link APP’s with each other (through deep-linking) even if you don’t have the said APP installed. WeChat is about reducing this inter-operability by constraining everyone to its own ecosystem.

Storage: unlike native APP’s, WeChat mini-programs have very limited amount of storage they can use (around 10 mb). This limits the complexity of these mini-APPs, and their usefulness (as they can’t really store significant amounts of usage data)

Who should develop a WeChat mini program?

Although we are painting a bleak picture of WeChat mini programs, Tencent’s Official Account highlights a few case where they might actually be useful.

In an article describing use cases of the min-programs, Tencent hypes them as a convenient way to check bus schedules:

Or as a solution to pay for your gas without having to get off your car:

Tencent’s Official Account gives more examples: airports, schools and parking lots. In another words, a mini-program might be a good option in the following context:

If your business meets the two requirements above, WeChat mini programs could be a good choice.

WeChat mini-APPs are a bold attempt to invent something that already existed. They are “fancy” version of web-APPs. But their many drawbacks compared to WeChat service accounts will make their mainstream adoption a challenge.

Want a first consultation about Social Marketing in China? Contact us.

7 reasons why you don’t need to develop a WeChat mini-program was last modified: January 15th, 2017 by

Udacity and Tencent WeChat are launching a new free course to teach developers around the world how to create their own mini-programs on WeChat, the most popular messaging app among Chinese consumers. This is the online education platform’s latest effort to teach students the skills to build “mini-programs” on the WeChat platform.

Developed by Tencent in 2011, WeChat is a multi-function mobile communications application. Among WeChat’s most disruptive capabilities are its “WeChat Mini Programs,” sub-applications within the WeChat ecosystem. And with more than one billion active monthly users in China, WeChat’s importance is almost impossible to overestimate.

The brand new English “WeChat Mini Program Development” is a free course that is made up of 6 lessons and is intended to take 4 weeks to complete. Aspiring developers from all over the world will gain skills to build “mini-programs” on the WeChat platform and to become professional Mini Program Developers.

“WeChat mini programs are an essential part of the Chinese user experience,” Tencent WeChat team said. “Our partnership with Udacity is offering a great way of teaching engineers around the world how to enter the Chinese market.”

“This is an opportunity to reach a massive audience,” said Sebastian Thrun, Founder and Executive Chairman at Udacity. “With everyone from McDonald’s, Nike, Tesla to Google releasing Mini Programs, the opportunity and demand for WeChat Mini Program Developers is incredible.”

Udacity first partnered with Tencent in 2018 to build its Chinese-language WeChat Nanodegree Program, a first effort to teach students the skills to build “mini-programs.” Since then, more than 2500+ students in China have benefitted from this program.

This update makes the WeChat ecosystem globally accessible, and we’ve again worked directly with the WeChat experts at Tencent to ensure that students learn the very latest skills to build WeChat apps.

Later this year, Tencent will also be holding a WeChat Developer Challenge, and it is open to all developer agencies, code houses, and startups who complete Udacity’s WeChat Mini Program Development Free Course. The WeChat Developer Challenge is a two-step operation starting with a one-month virtual development phase, followed by a 2-day event to develop relevant WeChat Mini Programs for services addressing the needs of Chinese travelers in Southeast Asia.

Founded in 1998, Tencent is a leading provider of Internet value-added services in China and globally. On June 16, 2004, Tencent Holdings Limited (SEHK 700) went public on the main board of the Hong Kong Stock Exchange. It is Tencent’s mission to enhance the quality of human life through Internet services. Tencent’s leading Internet platforms in China – QQ (QQ Instant Messenger), WeChat, QQ.com, QQ Games, Qzone, and Tenpay – have brought together China’s largest Internet community, to meet the various needs of Internet users including communication, information, entertainment, financial services, and others.